Unprecedented times have come upon us these couple of months. The whole world is facing an invisible enemy in the form of a virus which is termed as pandemic by the World Health Organization. People are requested to stay at home and not to go anywhere else except the roof of your own home. Offices are requested to work from home and those who can’t work from home can stay home and spend some time with the family.

I know people are suffering in Italy, America, Russia and other countries. China was the first of the countries to face this pandemic. But India as of now is facing the most tremendous crisis of all time. So, being an Indian, I really can’t focus on international news or empathize with the conditions of the world outside my country. Every news piece makes me wonder if we are facing wrath of Gods back-to-back this fateful year. Some people who believe in religion and Gods will definitely say God is taking their revenge but the question arises: Is this the evil of the entire world or just Indians? India is a developing country, progressing forward each day in the world economy. India has shown resilience during several previous crises, like the 2008 economic recession. India has remained united and fought the same.

But this time it seems to be different. People have become more partisan, their thoughts are divisive. The people of India are expressing thoughts which is shattering the idea of India. Their modern ideas show selfishness, divides people on the basis of their castes and culture, snobbishness, harassment to women and the politicizing of the situation.

But while we were tackling this virus, something worse was breathing around the corner. The furious Amphan made landfall in West Bengal on 20th May.

The Situation In Kolkata

As I am from Kolkata, West Bengal, I can see what kind of ventures are going on in West Bengal. A devastating cyclone named Amphan, or Umphun as many renowned local news channels named it, hit the biggest blow to Kolkata creating a tremendous loss to the State. I have seen the Chief Minister nearly give up as she couldn’t come up with words on how to reconcile the matters in the State. Cheap politicians still made up their minds to spill mud on the efforts of the Chief Minister. Now, as we are facing both the pandemic and catastrophic disaster left behind by the cyclone, politicians should work together to make the State a better place to live in. But as time flows on, we see the politicians and leaders are drifting away from their main objective of helping people. News channels continue to pour oil on the burning fire. They are still earning their ratings by engaging in political debates.

But the aftermath of the cyclone is grim. The roads were deserted, filled with water. There was no electricity, no cell phone reception, and no internet. There was nowhere to go. We are still going through the difficulties brought on by the storm that occurred over a week ago. People are still working night and day to restore peace in peoples’ homes.

In this pretext, I would like to share the disastrous effects the storm made in West Bengal. As per the guidelines of the Central Government of India, 25% of the workforce is allowed in every office. After this catastrophic disaster, there were places where electricity couldn’t come in time and it took about more than 50 to 70 hours to get them electricity. The electricity authorities in CESC and WBSEDCL are doing their level best to bring back electricity in all areas. This is a test of patience for the citizens of the State.

In addition to all these, Amphan wrecked Kolkata and many of its heritage. Amphan damaged Botanical Gardens, the most renowned and world largest banyan tree. The banyan tree was 284 years old and was the primary attraction to the people who visited the Gardens. Amphan devastated the tree which stood there for so many years as grandeur to the visitors of the Gardens. It was estimated that more than 3,000 trees fell and many birds have lost their lives Many homes got wrecked due to the fallen trees. In my area, there were two Royal Poinciana trees which had witnessed my birth and growing. They were old but strong. Now, they are just broken into multiple pieces. One of them fell into a building crashing the windows of the building into pieces and even breaking some parts of the building. During the storm, the roads were flooded and no one was getting reception in cell phones. There was no internet as the trees tore through the wires.

News of people getting killed due to electrocution was also coming up after the storm passed. Flooded streets stayed waterlogged for days as the drains. Electrical wires were also submerged in the water. It was difficult for people to move out of their houses. Local news featured the death of a firefighter while he was cutting down a fallen tree to clear the roads but was electrocuted as the trees were tangled up with electrical wires. Many such cases were found in the local newspapers and channels for the last few days after the storm. 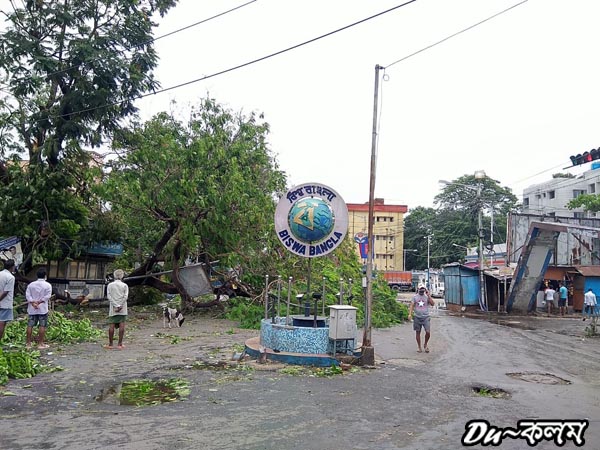 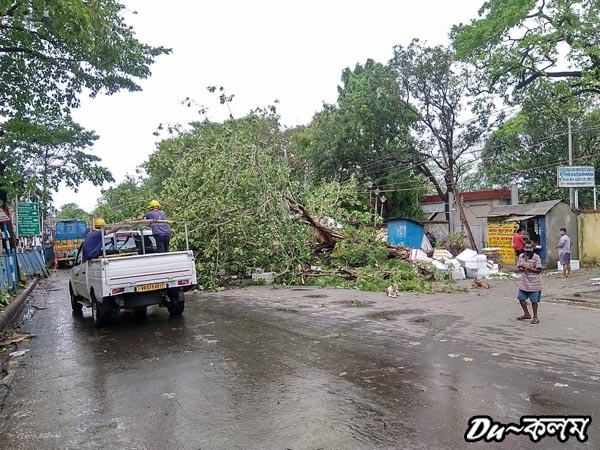 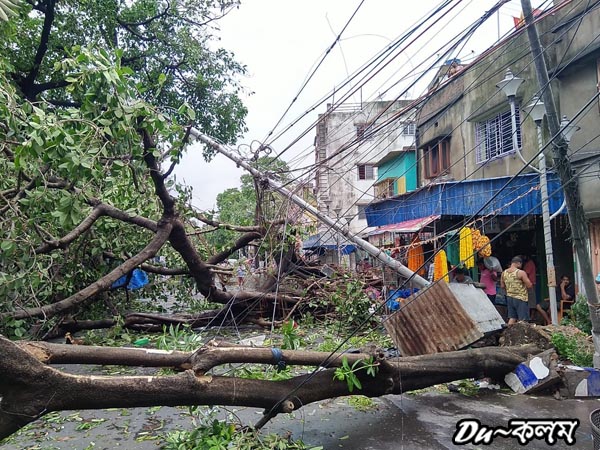 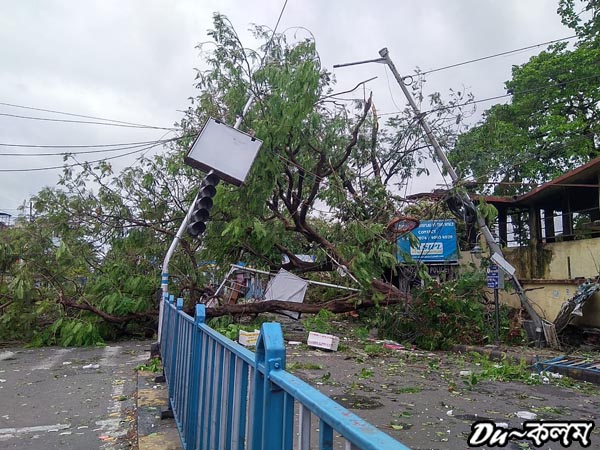 Sunderbans Has Been Almost Ruined

Most of the storm’s epicentre was at the Sundarbans, well known for its mangrove forestation and Royal Bengal tigers. The storm hit Sunderbans at a pace of 150 kmph battering almost 5 villages of 29 blocks of villages living 5,000 villages on the verge of starvation. As Sunderbans is a low income zone, most villagers tend to live on income based on farming, fish cultivation and poultry. Due to Amphan, the rivers went wild, dislocating fishes and as per the villagers. Fish cultivation was their only way of living and it was also taken away from them. Many people have lost their houses and their businesses of poultry cultivation and farming. The storm brought about so much salt water in the bay that the leaves of the trees turned yellow and withered out. Fresh water is a scarce resource in a place like Sunderbans. People over are believing that nobody is going to recover from the damage made by Amphan. People like Usha Das, Nibharani Santra and Kalipada Mondal, who are common villagers in Sunderbans, state: “Sob sesh hoye gelo” (Everything is finished). State Governments and NGOs are trying to reinstate the damages with money and food. 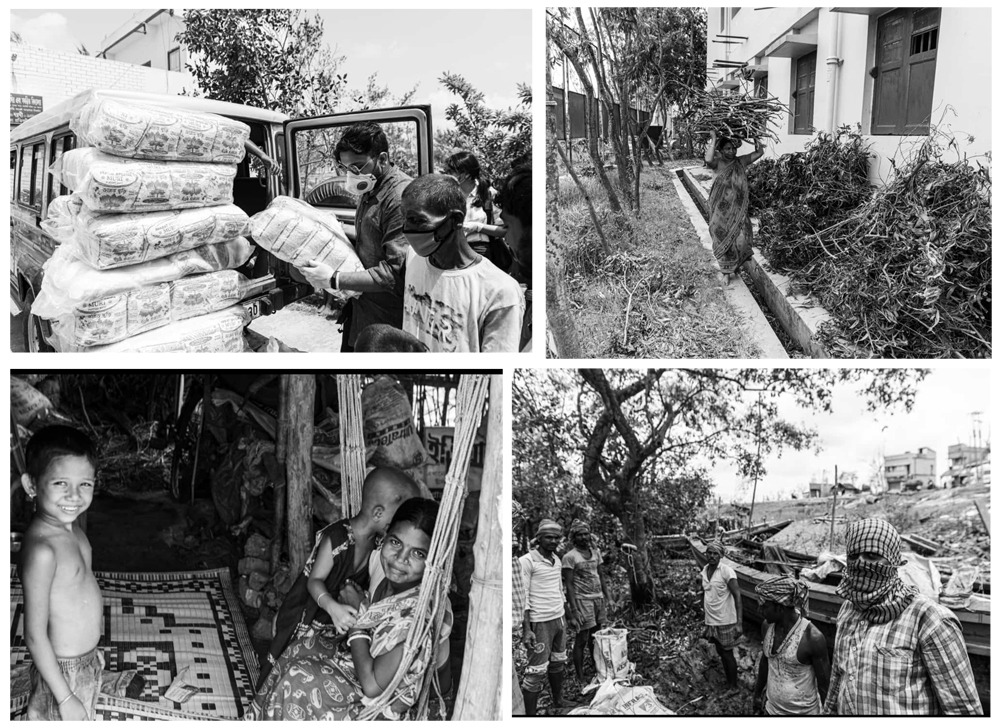 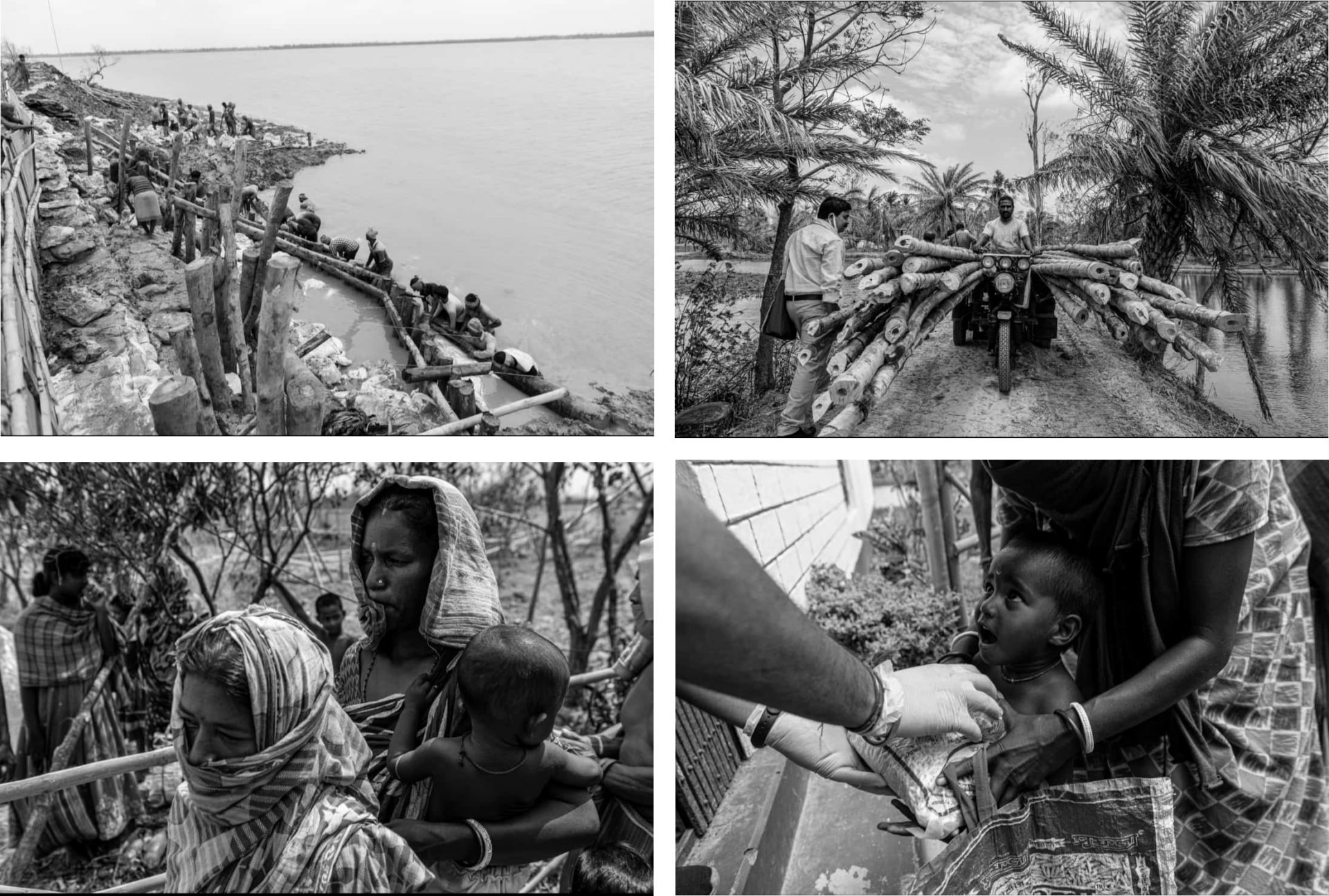 But, is it enough?

The people have lost a lot in one storm. Yes, we can only pray for their well being. Kolkata has taken about the toll of the storm just about 50% but Sunderbans took it in another level as it was the most aggressive in Sunderbans. In my suggestion, future plans regarding Sunderbans should be taken as of utmost importance not only because they are a tourist attraction, but they are also the loyal citizens of India and West Bengal. They are the ones who take most storm damages, for example, during Alia and Amphan. The location of Sunderbans lowers the massive impact of the storm. The infrastructure of the villages in Sunderbans needs to be stronger and the people should be given more employment opportunities other than farming and other forms of small income so that they could even stand for themselves.

I would like to conclude that we have lost a lot and taken a lot of damages due to the Amphan. But, as the citizens, we can be one and together we can fight through all this. I would like to suggest some of my views.

One would be that the politicians should work together rather than mocking or fighting the game of politics with the lives of the people. Sunderbans should be taken into a serious view as they face the most destructive occasions all time when a storm hits. More trees should be planted in all over the cities but it should be a little further out of residential or office buildings. Trees should be planted not just for the pollution purpose but during any kind of natural disasters they are ones to take the toll first saving a lot of people from the disastrous effects. I would like to end the conversation with the words that due to the pandemic virus and storm Amphan people lost a lot of people and the people stayed together and fought the crisis together. 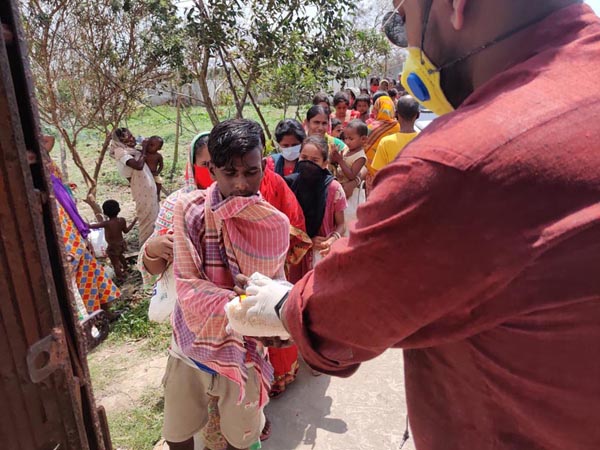 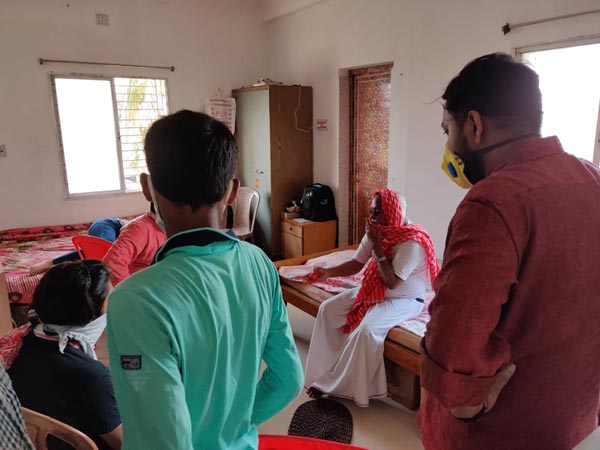 It is important for us to stand with people who are trying to reach out and help others. The people of Sunderbans are struggling and many groups are trying to help rebuild it. #RebuildSundarbans. This is such a group. They have already visited Raidighi and tried to help the locals there with medical supplies and sanitation. If you can, please help them so that they can help the locals of these impacted areas. You can always by sharing their message too.

Together, we can fight this battle. 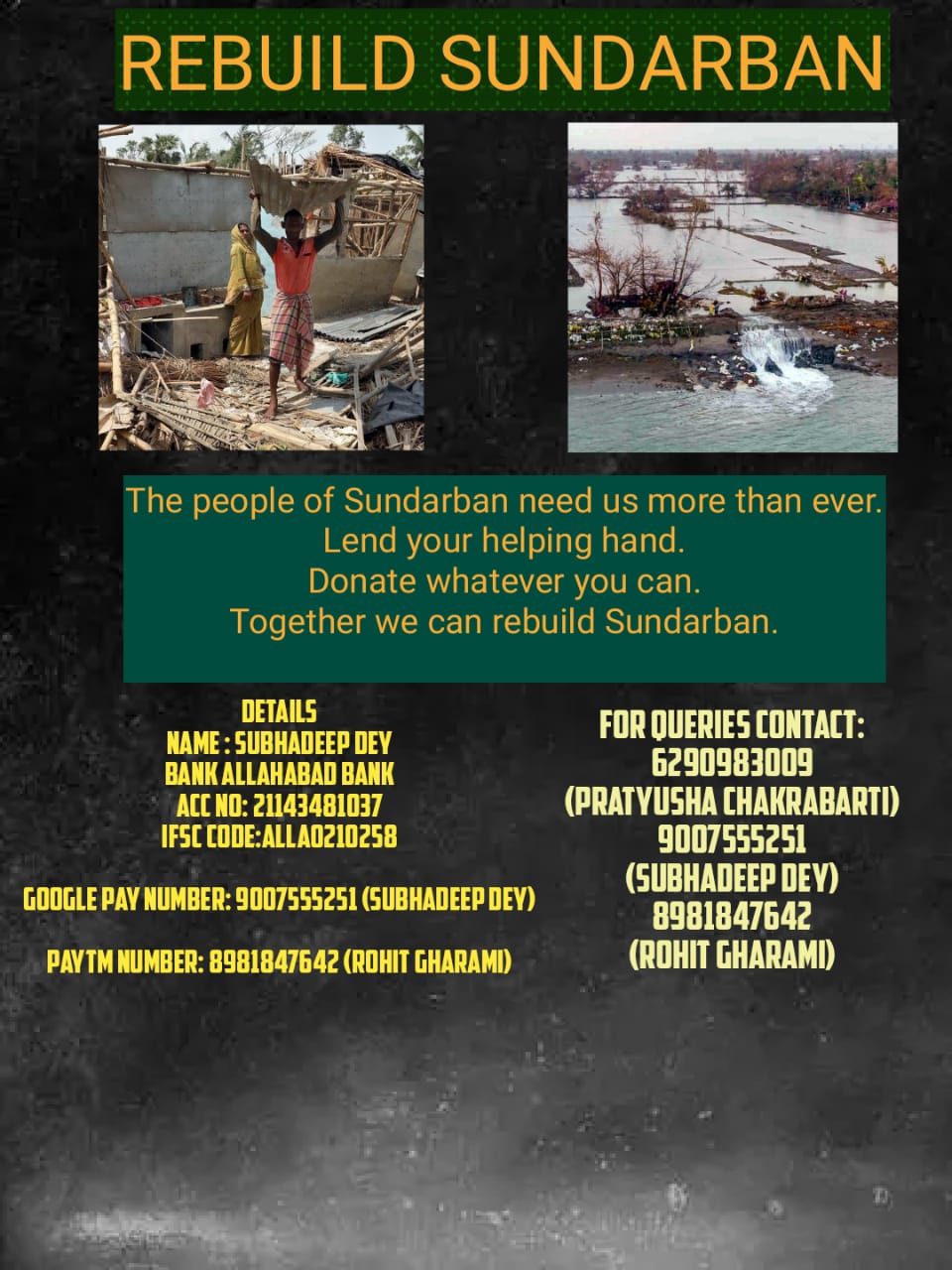 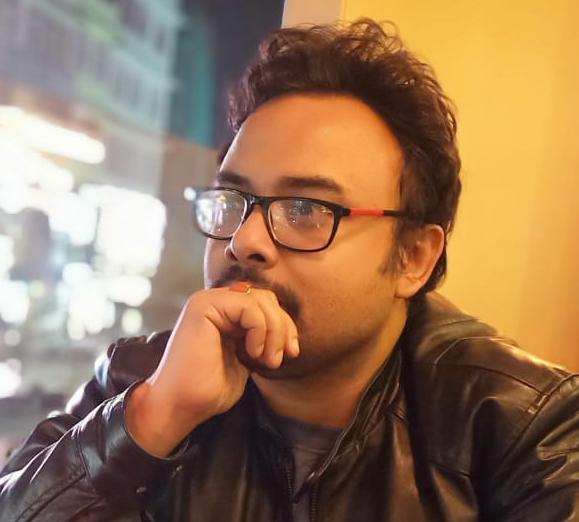 Bio-Service Holder with an attempt to write something about something.