Skip to content
Du-কলম
Home Miscellaneous, Article Birds in and around Kolkata
Views: 1,312

Contrary to popular perception one can see quite a few species of birds in or near the City. Sightings are more in winter when the species count increases significantly with the advent of winter migrants. Not all migrants are from far off lands. Some come down from the Hills – blue throated blue flycatchers, Tickells Thrushes, Scaly Thrushes, Ultramarine Flycatchers etc. However, quite a large percentage does come from afar. The most common ones are also among the smallest.  Almost every park with a bit of vegetation is the winter home to either a Blythe’s Reed Warbler or a Taiga Flycatcher.  The former breeds in Europe and North Asia. The latter’s summer home is even more north. A Taiga breeds in Eastern Russia, west upto Siberia and Mongolia. A taiga generally comes back to the same patch of greenery every winter – if a taiga decides to make your garden its winter home chances are it will come back every year as long as it lives. There it will stay throughout the winter, busily catching small insects right in front of your eyes while you see it but do not see it, a drab dull bird that can fit in the palm of your hand.  But try going back to Siberia on foot every year (no compass, no map, so GPS) and then coming back to the same patch of green year after year, Oh Wise Human!

Ducks are most easily spotted among the migrants. Once they choose their winter home they general stick around for the duration – big and attractive birds usually. A trip to Santragachi Jheel in winter, till a few years ago, would have meant seeing beautiful Northern Pintails, Gadwals and of course, thousands of Lesser Whistling Ducks.  Usually a star couple would  put in an appearance each year, hogging all the limelight –  A Ferruginous Pochard Couple one year, a Common Teal Couple the next etc. The Star Couple of the Year was the pair ogled and photographed by most birders. All this ended when the knowledgeable Howrah Municipality decided to clean up the Jheel, thereby destroying the aquatic vegetation forming the ecosystem which attracted the birds. By the time birders intervened to set things right the damage was done. The birds gave the place a miss that winter. Now that the ecosystem is recovering some are being drawn back to their old haunt but the place is yet to regain its old glory.

However, to the seasoned birder it’s the cuckoos, flycatchers, waders (birds who wade in water like sandpipers, Common Greenshanks, Pied Avocets, Black-tailed Godwits, Spotted Redshanks for example), minivets, seasonal raptors (birds of prey like eagles, falcons etc.)  which send the heart leaping. The rarer the bird the bigger the leap. Ducks are too easy to find after all. And quite a few no-so-common birds do turn up in or near Kolkata.

Not all migrants are winter migrants, however. The Jacobin Cuckoo – the famous Chatak of Indian mythology, comes at the beginning of the rainy season and is considered the Harbinger of the Monsoons. Most Jacobin Cuckoos come here to breed from Africa. They generally go back in the early part of winter. Cuckoos are birds which practice brood parasitism – that is they lay their eggs in the nests of other birds. In case of the Jacobin Cuckoo it is usually the Jungle Babbler ( the noisy “Chatarey” in Bengali) which is the target.  Here lies another mystery of Nature. How does a juvenile Jacobin Cuckoo, born in India, brought up by Jungle Babbler parents, know how to go back to far-off Africa? But go back they do.

Anyway, let’s get down to specifics regarding a few birds. Just to make things more interesting, birds chosen here either display sexual dimorphism or remarkable difference in breeding plumage. Now what is difference in Breeding Plumage? In case of some birds, the male develops additional plumage or coloration during breeding season – this is breeding plumage. At   other times the two sexes appear more or less similar.  And what is Sexual Dimorphism? Easy, here is an example – a peacock and a peahen. Sexual Dimorphism (in birds) is a phenomena found in certain birds in case of which the sexes look quite different. Another common example is our Kokil. The Kokil, as we all know, is a Cuckoo. But the English name is not Indian Cuckoo as many think. Indian Cuckoo is a totally different bird. The English name of a Kokil is Asian Koel. The male is a jet black bird with red eyes. The female is a brown bird with white spots, also with red eyes. But the few birds to be considered are slightly less common, though not by any means rare. Some are migrants while others are residents. Photos of both male and female will be shown to illustrate either the difference in breeding plumage or sexual dimorphism. 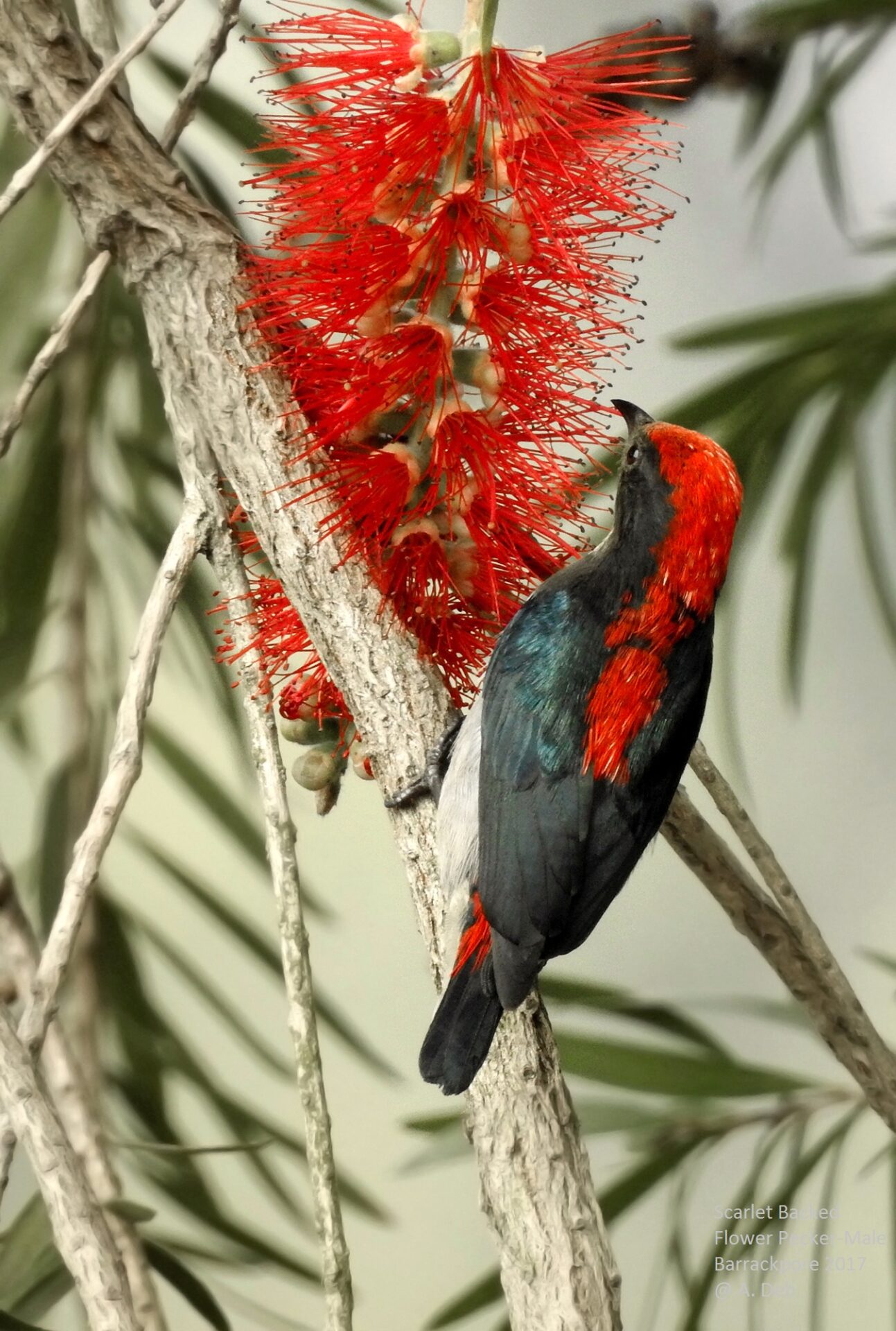 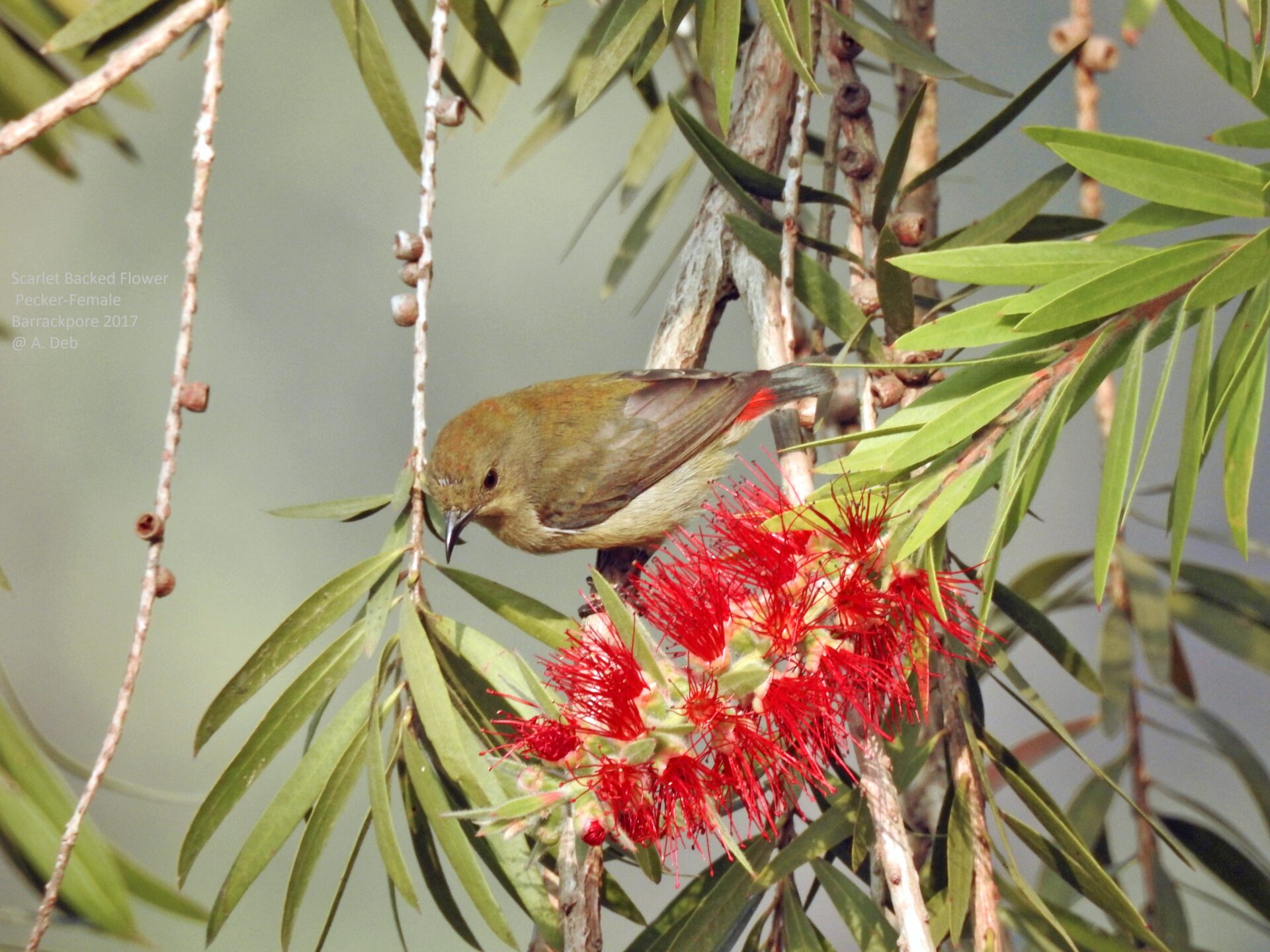 This is a case of sexual dimorphism. The bird is a resident and not a migrant. It is easily seen  in forests of North Bengal and the Sunderbans. But it is not surprising to find this beautiful bird turning up in your garden in winter if you live close to the City. This is because it loves the flowers of a certain garden plant, a type of bottle-brush plant that blooms mainly in winter. It is not the usual variety of bottle-brush but slightly different. The flowers are longer, like the dangling ear-rings ladies sometimes wear. Anyway, the leaves and flowers of the plant are shown in the photos. The point is, if you live in the City Outskirts and have this plant in your garden there is a very good chance you may be visited by this beautiful guest.

It is not a hard bird to find or photograph if you are a City birder, being a regular winter visitor to Jawahar Kunj in Barrackpore. Jawahar Kunj is a park maintained by the Forest Department of West Bengal. Make sure to be there early in the morning. There is a pond with bottle-brush bushes all round it. All you have to do is wait for the bird to turn up. It appears all of a sudden, as if from nowhere and starts pecking the flowers. No movements from you and the bird might come as close as a couple of metres. It generally disappears as soon as the sunlight becomes strong to reappear again in the late afternoon. But the light fails pretty quickly in winter so it is better to visit in the early morning if you are interested in photographing it. 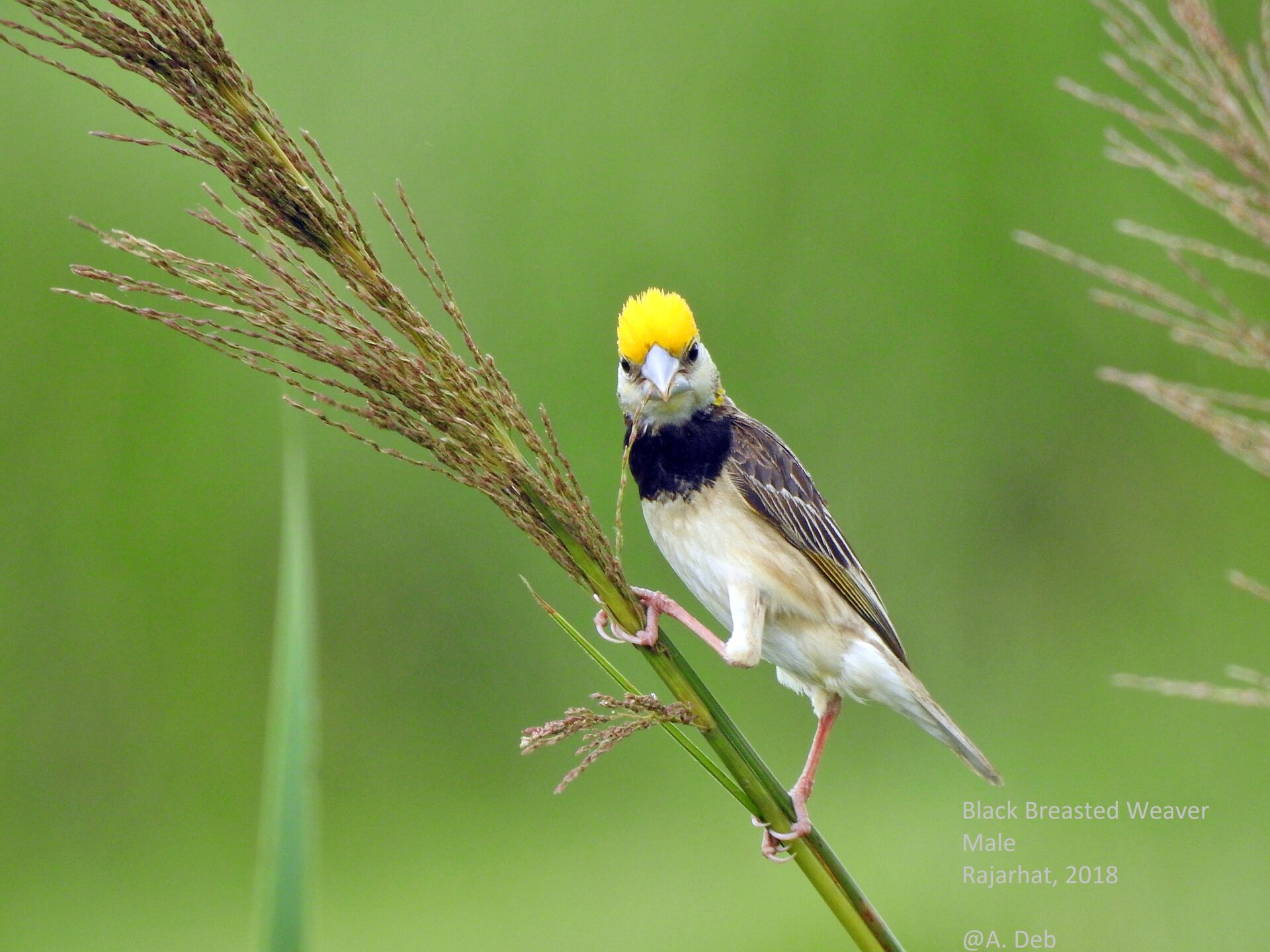 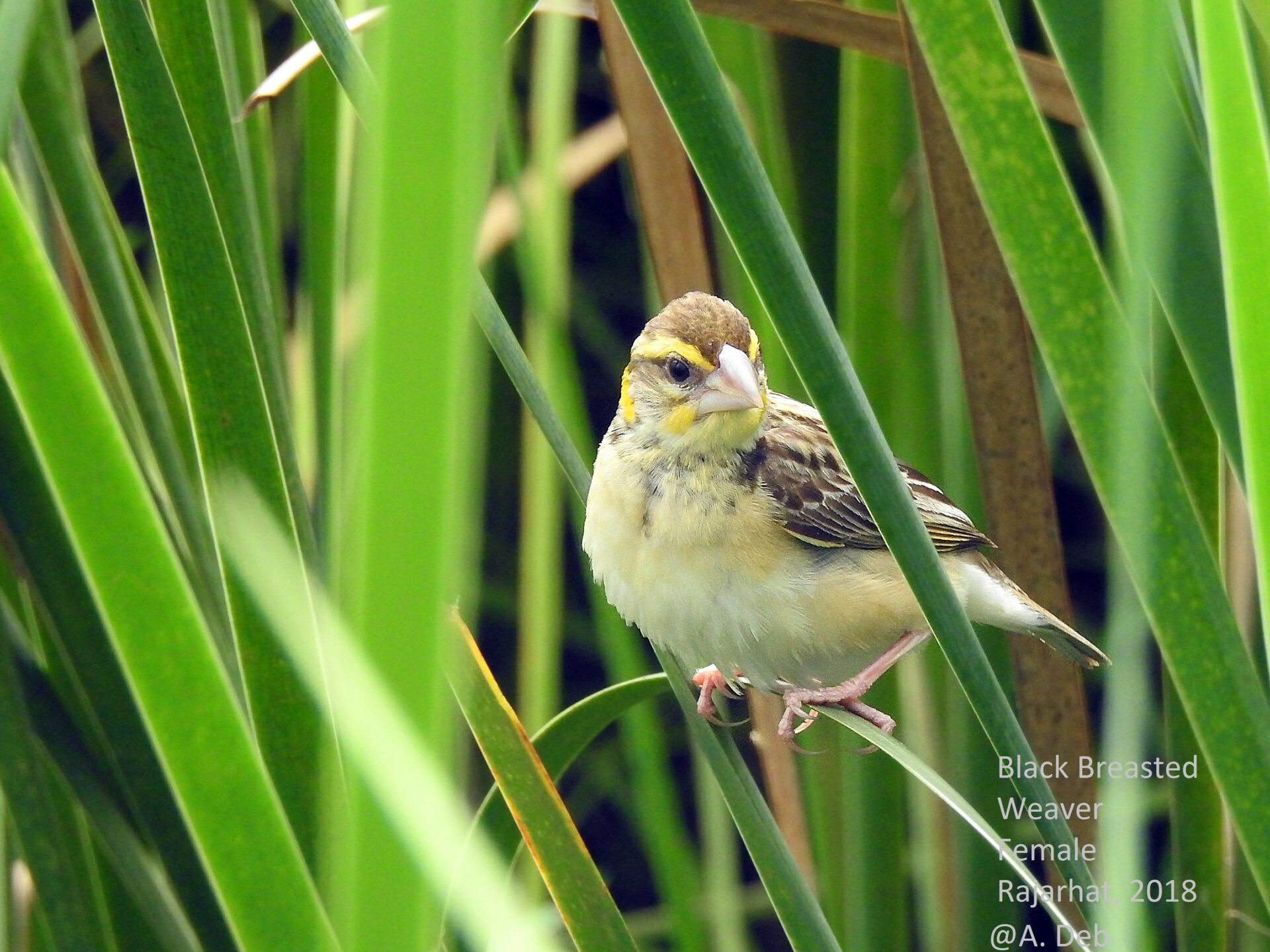 Another resident and in some cases a local migrant. We get to see quite a few type of weavers around Kolkata – the baya weaver (Babui in Bengali being the most common). But there are others – the Streaked weaver and the Black Breasted Weaver. Another weaver, the Finns Weaver used to be found in the Joka Wetlands but the last sighting was in 2008.

“Male constructs the nest single-handedly, with a group of females visiting it during late construction stage, jumping on the helmets (the nest is shaped like a helmet), tugging and testing, presumably for strength. If a female appears interested, the male bows low before her, presenting his golden crown to her. He flaps his wings deliberately and sings softly tsi-tsisik-tsisik-tsik-tsik, like the chirp of a cricket or the subdued squeaking of an unoiled bicycle wheel. Once the female agrees and permits copulation, he quickly completes the rest of the nest, and she lays her eggs inside. He immediately commences a second nest nearby to attract other females, and occasionally a third nest, or very rarely a fourth. Nests not accepted by females may be torn down by the builder himself.”

Black Breasted Weavers usually build their nests in the hogla reeds beds found in wetlands near Kolkata. The birders of Kolkata usually head to Rajarhat to find them during the monsoons. If you want to photograph them you should go in July & August while nest-building is in progress. It’s unethical to disturb any bird once the eggs have been laid. 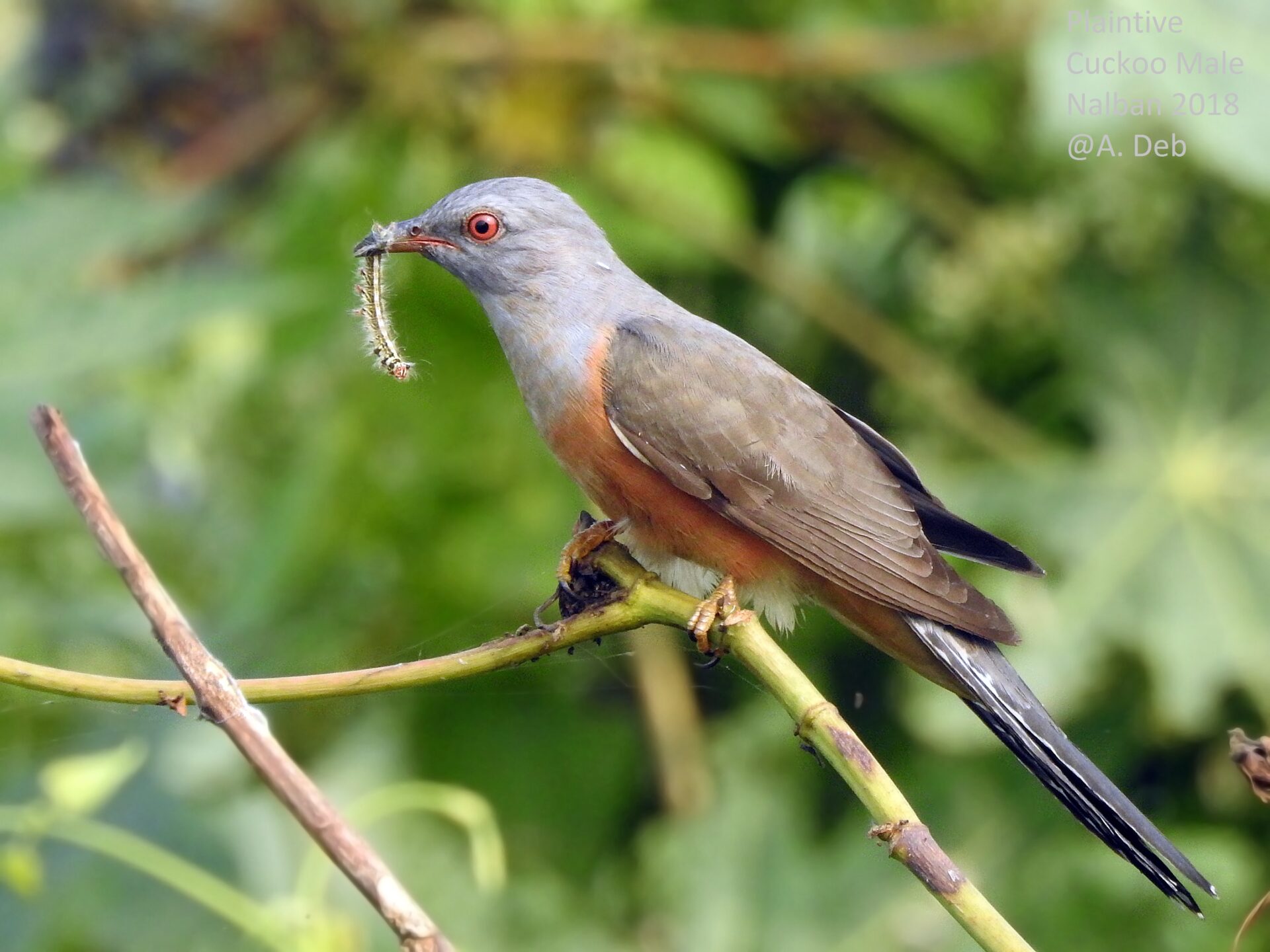 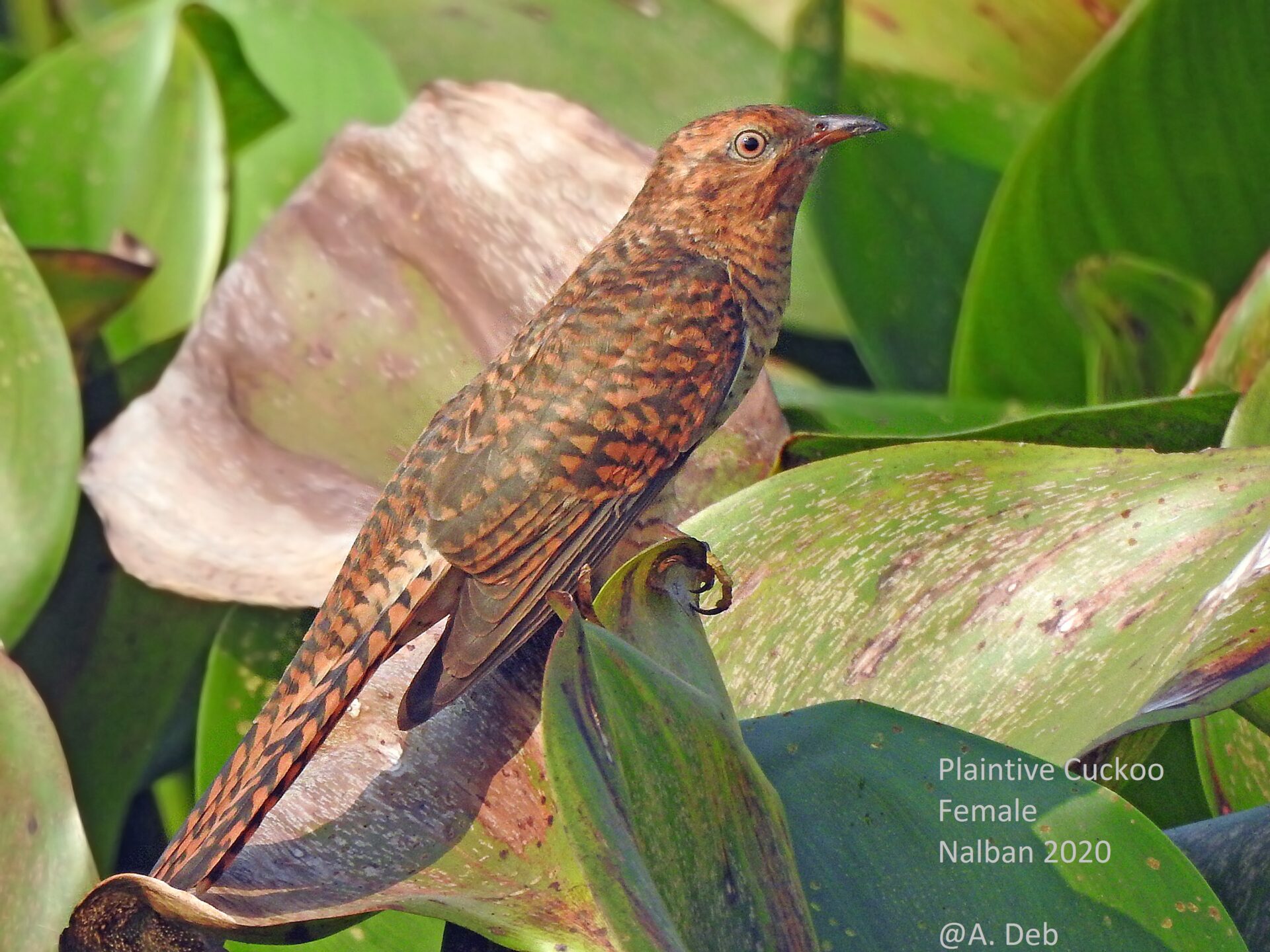 Here is another case of sexual dimorphism. Plaintive cuckoos are found in North-east India, South-east Tibet, Southern China and Bangladesh. Another subspecies is found in Indonesia, Birds of the first sub-species migrate to mainland India in winter. Like all cuckoos it is a brood parasite,  preferring the nests of much smaller birds to lay their eggs – prinia, common iora, tailor bird – all the hosts are smaller than a house sparrow while a Plaintive Cuckoo is about the size of a Common Myna (Shalik in Bengali). One feels sorry for the little host who has been the target of a Plaintive Cuckoo. What an appetite the poor mother and father has to fulfil!

The Bengali name of the Plaintive Cuckoo is Korun Papia. Plaintive is good but “Korun” is better. The call of the bird, which it keeps on repeating, really sounds “korun” – a heart-rending cry of sorrow.  Plaintive cuckoos are usually found in Kolkata (in winter) in lightly wooded areas often close to human habitation and wetlands. The East Kolkata Wetlands is a very good place to find them. Photos of both male and female bird posted here were taken there.

It is a treat to watch a Plaintive Cuckoo devouring a hairy caterpillar. After picking it up, usually from the ground, the bird returns to its perch on a tree or bush. There it holds the caterpillar by one end in its beak and keeps on jerking the caterpillar till it loses all its hair and also the alimentary canal. Then it gobbles the caterpillar. 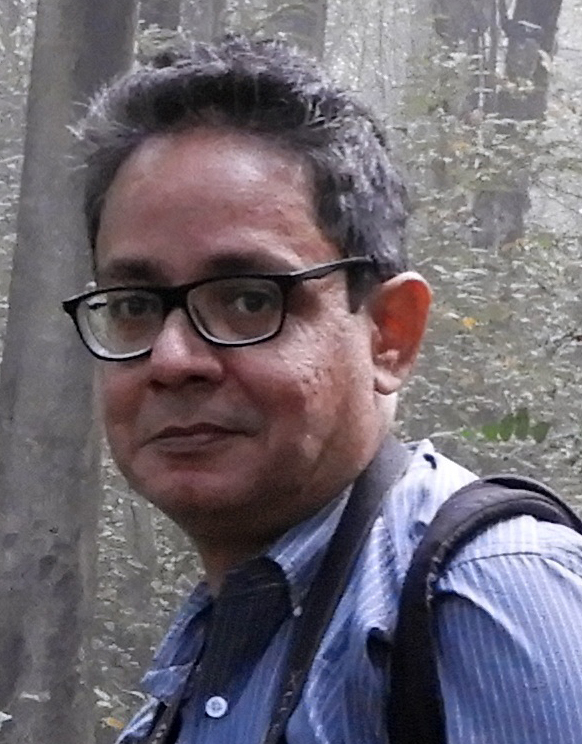 Avid birder, forest-lover and classical rock music fan. Fond of going on off-road hikes (on foot) over the countryside, preferably in my own company.